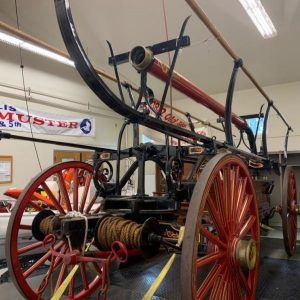 The Cosmopolis Volunteer Fire Department was established by ordinance of the City Council on December 6, 1895.

In 1926, after a conflict with the City’s Mayor, all of the members of the Cosmopolis Fire Department resigned. The management of the Grays Harbor Commercial Company, recognizing the need for fire protection, assigned the mill’s superintendent to assemble and maintain a new fire department. The structure of the organization formed in 1926, after numerous changes to adapt with time and technology, is the basis of the Cosmopolis Fire Department today.

The first piece of firefighting equipment purchased in Cosmopolis was the “Old Tiger” hand pumper. It is presently kept at the Cosmopolis Fire Department and occasionally displayed in local parades.

The first motorized apparatus was a 1915 American LaFrance Brockway Torpedo acquired in 1925. The Brockway is still on display at the Aberdeen Historical Museum.

During World War II, the Cosmopolis Fire Department volunteers purchased an Army GMC flatbed truck and rebuilt it into a fire engine, incorporating a WiIIies skid mounted pump. This engine was in service through the early 1960s and was sold to the Grays Harbor Fire Protection District (GHFPD) in Wishkah for $1. When the GHFPD retired the truck, it was returned to Cosmopolis and is now on display in the Denny York museum.

In 1952 the City of Cosmopolis purchased its first new fire engine, an American LaFrance on a Ford chassis with 500 gallon per minute (gpm) pump and 500 gallon water tank. This truck was the primary fire suppression apparatus for the City of Cosmopolis until 1972, when it was retired. It is on display in the Denny York museum.
In 1961 the City purchased a custom American LaFrance 1000 gallon per minute (gpm) pumper with a 500 gallon water tank. This pumper was put on reserve status in 1988, and is in storage until it can be displayed in the Denny York museum.

Prior to 1976 the fire department did not routinely respond to aid calls and our primary activity was fire suppression. After 1976 fire departments were expected to answer emergency calls involving accidents, illness, and rescue. A few years later hazardous material emergencies were added to our responsibility. The number of responses tripled, from about 35 in 1975 to well over 100 per year. In 1976 we remodeled and equipped our 1967 GMC utility pick-up truck into an aid response vehicle to meet the need. 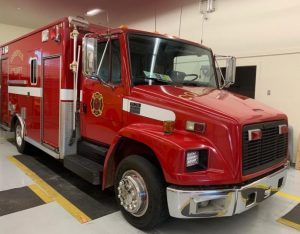 In 1986 we purchased a Ford F350 cab and chassis and built an aid response vehicle, 7641. This vehicle was dedicated to the chief at the time, Denny York, who died in 1986 as the result of an industrial accident. Chief York was instrumental in forming a muster team of firefighters competing with vintage fire equipment, and using the 1952 Ford pumper. During the early ’80s firefighters organized “Engine Co. #1” for the purpose of restoring vintage fire apparatus and competing in fire musters. Engine. Co. #1 is a private organization of firefighters and other interested individuals and is not officially associated with the City of Cosmopolis. The Engine Co. purchased a 1926 Seagrave pumper and has been working on restoring it. Members of the Engine Co. conducted some money raising projects to fund the restoration and also built the museum facility at Mill Creek Park. The museum was dedicated to Denny York after his death in 1986.

In 1990 firefighters recognized the need for a new fire station. The facility in use now is the original structure which served as City Hall. A committee was formed in 1990 to work towards replacement of the existing structure which has become inadequate to meet modern requirements. At this time we expect to have a proposal for a new station on the November 1996 ballot.

The November 1996 ballot for the new fire station failed a 60% majority by a couple of votes. The levy was for $1.5 million. The city council reduced the levy to $1.3 million and resubmitted it on the February 1997 ballot. This time the measure passed with 78% favorable vote. A committee appointed by Mayor Jerry Raines selected an architect to design the structure. Preliminary estimates were based on a plan prepared by Al Gozart. The committee interviewed eight architectural firms and selected Thomas Cook & Associates from Tacoma. Ron Thomas designed the station based on input from a committee of firefighters which included Chief Dan Carter, Bill Bramstedt, Loren Williams, Todd Moulton, Tony Lupo, Dan Wilson, Bill Smith, and Tom Distler. The design went out to bid, won by contractor Andy Noel from Morton, W A. Construction began in September 1997, and completed in August 1998. We moved into the facility in September 1998, and a dedication ceremony was held Saturday September 26th, 1998.